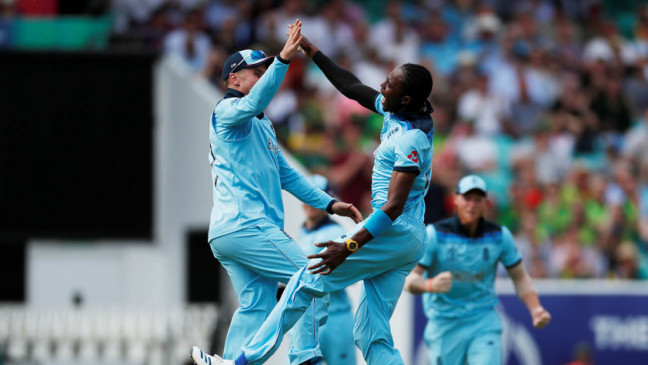 England pacer Jofra Archer was overjoyed as the paceman dismantled South Africa’s batting line up after fifties from four England batsmen saw the hosts post a solid total during the World Cup opener at then Kennington Oval in London. Photo: Reuters
Reuters Reuters

England's Jofra Archer and Jason Roy were both fined 15% of their match fee for misconduct during their 14-run defeat by Pakistan in the World Cup on Monday, the International Cricket Council (ICC) has said.

Pakistan captain Sarfaraz Ahmed was also fined 20% of his match fee for a slow over-rate offence while his team mates saw their match fees reduced by 10% each after the side was ruled to be one over short of their target.

"Jason Roy was found to have breached Article 2.3... which relates to using audible obscenities in an international match," the ICC said in a statement.

"The incident occurred during the 14th over of Pakistan's innings when Roy used an audible obscenity after misfielding which was clearly heard by the umpires."

Archer, meanwhile, was sanctioned for showing "obvious dissent" after bowling a wide delivery in the 27th over in what turned out to be a forgettable match for the fast bowler.

The 24-year-old fast bowler conceded 79 runs in 10 overs without picking up a wicket.

Both Englishmen had one demerit point added to their disciplinary record.

Four demerit points in a two-year period are converted into suspension points and two points lead to a ban for one test or two ODIs or two Twenty20 matches.

Pakistan play Sri Lanka next on Friday in Bristol while England play Bangladesh in Cardiff a day later.