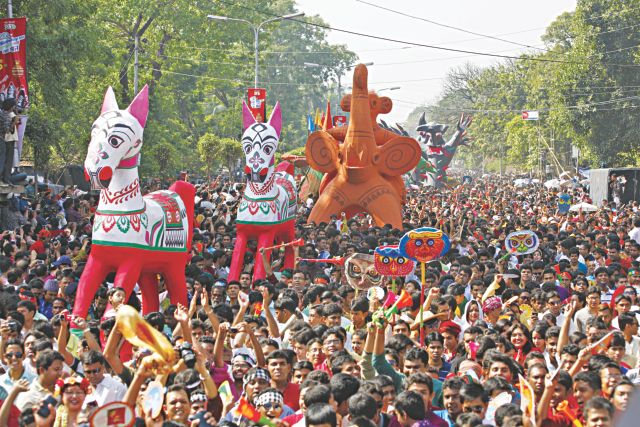 April 14, 2001, people from all walks of life gathered at the Ramna Batamul, Dhaka to attend Chhayanaut's Pahela Baishakh programme. A series of blasts near the stage muffled the renditions on the first morning of the Bengali Year 1408; killing people, Bengalis --- Muslims, Hindus, Christians and Buddhists.
The attack on a cultural festival in celebration of our heritage and tradition was unprecedented in the history of independent Bangladesh. Not even the Pakistanis dared to attack any cultural festival with such atrocity as did the religious extremists in 2001. The bomb blast at Ramna Batamul's Pahela Baishakh celebration was an eye-opener for the then government regarding the presence of militant element wearing the mask of fundamentalists Islam in the country.
Twelve years later, on the eve of the Bengali year 1420, the country again feels the threatening presence of religious extremists. This time they have surfaced under different political and non-political banners. The nation witnessed in apprehension and shock how the national agenda of the trial of the war criminals has been diverted into a witch hunt for atheists, making way towards stripping off the secular identity of the country. The fanatics even demanded demolishing of all sculptures, banning programmes of lighting candles and so on. It is only a matter of time before they demand the ban of all cultural activities even Pohela Baishakh.
Pahela Baishakh is a cultural festival like most other New Year celebrations found across the globe in other cultures. In most cases, this celebration has little to do with religion but more to do with season change. In societies, a change in the season brings about major lifestyle adjustments; for instance spring or summer in many countries of the world is a welcome change from the bitter, unfriendly winter.
It however cannot be denied that ancient societies associated these changes of nature with divine forces, paying homage to gods and deities, hoping for a better future. This gave rise to rituals and traditions of celebration New Year. Even then, New Year festivals cannot be classified as religious events, because most religious texts have not decreed the celebration of a new year neither condemned it. This is an event the people have invented spontaneously and celebrate it for centuries.
New Year celebration is evident in most other Muslim and non-Muslim countries. Imlek, is a national holiday in Indonesians celebrated across the country though basically it is New Year of the Chinese community of Indonesia. Even Communist China celebrates their traditional New Year with much fervour as it brings all the communities of the country under one umbrella. Countries of the Middle East celebrate the first Muharram, the first day of the Islamic calendar with prayers and stories of Hijrat. This too is celebrated spontaneously by the Muslims of these countries as no such order to observe the first day of Muharram can be found in the holy texts.
In Bangladesh too, the celebration of Pahela Baishakh does not belong to any particular religious or ethnic community. The Moghul Emperor Akbar introduced the Bengali calendar that is currently in use. But even before Akbar, people followed the natural course of season and according to expert opinions Agrahayon was probably the first month of the year and the Nabannno Utsob (harvest festival) coincided with the New Year celebrations. Moghul Emperor Akbar revised the calendar mainly for administrative reason to simplify the tax collection process. Merchants followed this calendar to draw to a close their financial year. Even today in many parts of the country craftsmen and traders use the Bengali calendar as the basis for their financial year.
Rituals and traditions emerge out of people's daily life, their joy and sorrow. Celebration of such events does not make one less pious or religious. In fact even fanatics who claim themselves as protectors of religion, fall into their own trap of rituals and forget their ultimate goal of finding the Almighty.
Bangladesh was born with the idea that it will be a country for all religions and ethnic groups who can practice, preach and exercise their religion and tradition with full liberty and in harmony with others. That very ideal is at threat today.
In 1965, the first Pahela Baishakh Batamul programme was organised by Chhayanaut to protest against the Pakistani military governments' attempt to cleanse the Bengalis of their cultural identity. Today we face the same threats, not from a foreign occupying force but from our own countrymen wearing the mask of religion. The celebration of Pahela Baishakh in the Bengali year 1420 thus becomes more relevant today.

The writer is a Feature Writer, the Star Magazine, The Daily Star.